Amplifier vs Receiver – A Comparative Study

Assembling the perfect audio system requires some knowledge of how audio components work. If you want to build a stereo system that not just sounds great but also gives you the most bang for your buck, you need to have a basic understanding of the technicalities of audio equipment. What goes with what, what works and what doesn’t ? Because when it comes to creating a flawless sound system, a one-size-fits-all philosophy seldom works. It is all about mixing and matching to get the best fit.

So what is the right gadget for your high-end pair of speakers ? Does it need a separate amplifier or will a receiver suffice? In this article we will answer these very questions, and more. So let’s get started.

Receiver Vs Amplifier – Which One You Need ? 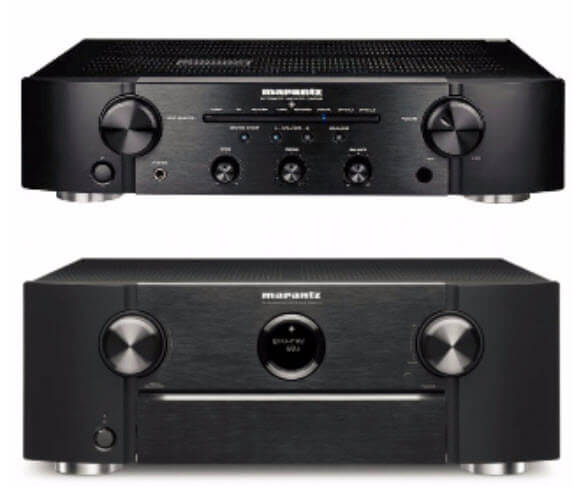 What is an amplifier ?

An amplifier is an electrical circuit that increases the power of a weak audio signal. It converts a low-voltage signal into a signal with enough gain to drive a loudspeaker or headphone. Gain indicates the amplifying capability of an amp and is the ratio of output voltage, current, or power to input. An amplifier has 3 connection ports: an input from a source, an output to a loudspeaker, and a power source like a 110 volt wall power receptacle. Amplifiers are of two types, depending on their physical position on the signal chain. The first is a preamplifier and it does the preliminary amplification. The preamp lets you collate and select multiple inputs, and decide the required level of gain. It boosts the power of the audio signal as it first enters the sound device and brings it just up to a level where it can be handled by the power amplifier. The power amplifier does the second round of amplification. It receives the mildly pre-amplified signal, adds the required gain, and sends it to the loudspeaker. The amplification at this stage is much more powerful and the signal is greatly enlarged.

An amplifier, be it a preamp or a power amp, can be a stand-alone device sold separately. Or it can be a part of an audio contraption like a receiver. This brings us to our next segment:-

What is a receiver?

A receiver, also called A/V (audio/video) receiver, is an electronic gadget that receives audio and video signals, processes and enlarges them for the purpose of driving loudspeakers and displays screens. It is an all-in-one device with a preamp, a tuner and a power amp. It offers a comprehensive solution for a speaker system. The tuner pulls in the audio signal, the preamp preps the signal for the power amp, and the power amp further boosts the pre-amplified signal before routing it to the loudspeaker. An A/V receiver can have anywhere between 2 to 9 channels for supporting surround sound speakers, each channel driving a separate speaker. A receiver makes it very convenient to run a home theater system with multiple speakers. Most receivers also have HDMI inputs and outputs which add to their versatility. AV receivers are also cheaper and easier to install than separate amplifiers. They are single-unit gadgets and do not occupy much space.

To put it differently, a receiver is an amplifier with a built-in radio. The radio acts as an input source for the amp. It requires no connections except a pair of speakers. A radio tuner is a music source for the amp just like a smart phone, iPod, DVD player, CD player or turntable. The only difference is that it is fitted into the chassis of the receiver. The presence of a radio tuner transforms the device into a ‘receiver’, and it means that it can also receive radio signals, aside from amplifying them. So, if your home theatre amplifier also has a radio in, it is actually an AV receiver.

Difference between an amplifier and a receiver :

An amplifier is a simple contraption that accepts a weak signal, amplifies it, and feeds it to the speakers. You cannot change the source, regulate the equalizer or adjust the volume as you like. It does not have these provisions. A receiver, on the other hand, does all the things an amplifier does, and offers an array of inputs and outputs, and a comprehensive interface to manage it all. In other words, a receiver is a multi-purpose gadget while an amplifier is a single-purpose gadget.

Advantages and disadvantages of an amplifier

An amplifier gives you a lot of flexibility. It lets you customize your music system any way you want. You can cherry pick your components to suit your specific needs. You can match your speakers with the right amp that gives you the best possible sound. You can also choose between tube and solid state amps. A tube amp produces a warmer sound whereas a solid component offers a more powerful sound. A separate amplifier is also easy to upgrade and downgrade. You just need to change the preamp when newer technology arrives. And if you feel like scaling down the system to serve a smaller audience, you can do that too.

The downside of a separate amplifier is that it is cumbersome. You have more devices to handle, and therefore, more clutter. A sound system with separate amps isn’t very easy to carry around. It demands more storage space and is not awfully travel-friendly.

Advantages and disadvantages of a receiver

The biggest advantage of a receiver is convenience. It is easy to install, use and maintain. It is also cost-effective and provides a comprehensive set up for any speaker system. A receiver has all the inputs and outputs you would need, including HDMI. It has a radio tuner. It has a preamp which lets you choose the input source and control the volume, channel balance and tone. It has a power amp which jacks up the weak signal to drive the speakers. In short, a receiver puts everything in a single cabinet – a tuner, a preamp, and a power amp – and serves as a one-stop-shop for multiple audio requirements.

The flipside of a receiver is its lack of scalability. You cannot customize your speaker-amp combinations with different power amps for different speakers. There is not much room for experiment. You can tweak around a little maybe, like say, you can bridge two channels to power a subwoofer, but the arrangement might not be able to handle the low impedance of the sub. So, there are a few technical issues like that.

Can an external power amplifier and a receiver work together ?

Yes. You can add a separate power amplifier to an A/V receiver and it will work just fine. This of course is not a typical arrangement, although people do tend to go for it if the space in which the sound system is is very large. This is because larger rooms need powerful amplifiers to achieve high sustained Sound Pressure Levels or SPLs. Another scenario that would call for a separate power amp is if you like loud music. An external power amp will give you ear-shattering volume levels. Also, make note of your speakers’ impedances and sensitivity ratings. Systems that enter the 4 ohm range at low frequencies typically have a higher power requirement, which the built-in amp of your receiver might be incapable of meeting. Finally, if you run your main speakers full range, they will require more power for bass-heavy music. For all these special audio needs, you will benefit from adding an external power amp to your A/V receiver.

What is a stereo amplifier ?

A stereo amplifier is an amplifier with two output channels, one for the left channel sound and the other for the right channel sound. In fact, any audio gadget with two channels is called stereo equipment.

The final question: What does your sound system need – an amplifier or a receiver ?

If you have a small or moderate-sized speaker system, we suggest you get yourself a home theatre receiver. It is fully capable of handling your amplification needs and you will not have any complaints. Plus, latest receiver models support new-age technologies like 4K video and Dolby Atmos, which is an added incentive.

On the other hand, if you are a true-blue audiophile who favors conventional stereo systems, you should go for separate amplifiers. You can experiment all you want and try different speaker-amp combinations. You can also upgrade and downgrade the system as you please with your changing needs without too much trouble. Also, your high-end speakers will get the right amount of power they need to function at their optimum level.

To find the best marine amplifier, read our detailed study on marine amps.

Feel the punch in outdoor parties with these best in class outdoor sound systems.